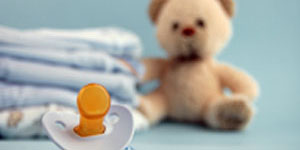 Silver nanoparticles are the most common commercialized nano technological product on the market. Due to its unique antibacterial properties, silver nanoparticles have been hailed as a breakthrough germ killing agent and have been incorporated into a number of consumer products such as clothing, kitchenware, toys and cosmetics. Many consider silver to be more toxic than other metals when in nanoscale form and that these particles have a different toxicity mechanism compared to dissolved silver. Scientists have concluded that nanoparticles can pass easily into cells and affect cellular function, depending on their shape and size. However, little has been done to evaluate these interactions and their health impacts on humans. Preliminary research with laboratory rats has found that silver nanoparticles can traverse into the brain, and can induce neuronal degeneration and necrosis (death of cells or tissue) by accumulating in the brain over a long period of time. Other potential harmful effects include the generation of dangerous radicals that injure cells by attacking DNA, proteins and membranes. Due to their size, these particles can readily penetrate the body and cells through various routes.

Inhalation:
>Nanoparticles can become airborne easily due to their size and mass. When inhaled, nanoparticles can go deeper into the lungs reaching more sensitive areas. There they inflame the lungs, which must work harder in attempts to remove the foreign particles. It is still unknown whether these particles can be removed by the lungs or whether they remain as deposits within lung tissue. Research is still ongoing to investigate whether nanosize particles cause pulmonary inflammation as well as systemic effects, and whether they translocate from the lungs to other organs such as the liver, kidney or brain.
Skin Absorption:
This route of exposure occurs mainly through cosmetics, sunscreens, textiles and clothing imbedded with silver nanoparticles. Nano particles are known to be absorbed by the skin. Broken skin, or skin with cuts and wounds, may give rise to easier and direct absorption of nanoparticles into the blood stream and translocation in the body. The fate and effects of these particles on, and within the skin and human body are not clearly understood. Other problems still to be investigated include the interference with resident microflora on the skin.

Ingestion:
This type of exposure can come about through hand to mouth transfer of particles from products imbedded with nano silver or from food and food packaging. Ingestion of particles can also arise due to respiratory clearing actions of inhaled particles. Little to no information is available for the fate and effects of silver nanoparticles within the digestive track. However, observations in laboratory animals have documented that uptake of particles from the digestive track into the lymphatic and circulatory systems can occur. Uptake also seems to primarily occur in the intestines and is dependent on size. While the health impacts are still unknown, the fact that the digestive process utilizes beneficial bacteria to assist in the digestive process, the presence of silver nanoparticles may undoubtedly have an adverse impact of these native bacterial populations.

Nanotechnologies have been employed in food production, processing and packaging. The Project on Emerging Nanotechnologies at the Woodrow Wilson International Center for Scholars has followed the progress of the use of nanotechnologies in the food industry. According to their 2008 report entitled “Assuring the Safety of Nanomaterials in Food Packaging: The regulatory process and key issues,” nanoparticles raise safety questions different from those raised by conventional scale version of the same material.

Many food packaging materials have been incorporating nanoparticles, especially silver nanoparticles, to prolong the shelf life and safety of packaged food from microbial agents. Researchers are developing ‘smart packaging’ that would be able to tell if the packaged food becomes contaminated, as well as respond to changes in environmental conditions and self-repair holes and tears. Other nanoparticles have been known to be included in food to enhance flavor, improve emulsification and nutrient availability. Nanosized herbicides, fertilizers and other agrichemicals are also being developed to improve the efficiency of growing crops.
While these advances in technology are promising and exciting, the fate and impacts of these particles have not been equally studied. There are major concerns that silver nanoparticles can migrate from packaging and into foods, exposing consumers to risks that are not yet known. Many of these products are not labeled to alert the consumer to the use of nanoparticles in the product and thus taking away the consumer’s right to choose whether to avoid these products or not. A lack of governmental oversight and regulation on this new technology further compounds the problem of a lack of data and safety testing.
While the science is trying to catch up, consumers should be wary of the products they purchase that contain silver nanoparticle products. The widespread use of products that contain ingredients that can also easily enter the human body, but whose impacts have not been studied, is a definite cause for concern. Scientists agree that the high speed of the introduction of nanoparticle based consumer products to the market urges the need to generate a better understanding about the potential impacts that these particles may have to biological systems.

What To Look For….

When shopping, there are certain words to look for that may indicate the use of nanotechnology. These include:
“nano, ultrafine, nanodelivery systems, micronized”
These key words, on a list of ingredients, indicate that a product contains nanomaterials, and is potentially unsafe. Unfortunately, most nano-products do not contain labels identifying them as such