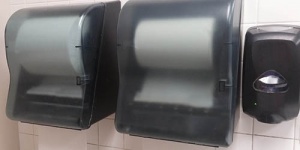 If one person contaminates a surface and another person touches that surface, the contamination is shared. Looking at a hard surface such as stainless steel, for example, Charles Gerba, who holds a Ph.D. in microbiology and teaches at the University of Arizona, in Tucson, says 30 to 50 percent of the organisms that are on that surface will transfer to a persons hand.

Touching is not the only contamination threat — another issue is toilet spray or toilet plume. The American Journal of Infection Control in 2012 stated that toilet plume “could play a contributory role in the transmission of infectious diseases,” but added that additional research is warranted to assess the risks.

Toilet plume became a talked about topic after first being addressed in a 1975 study by Gerba in the Journal of Applied Microbiology. Gerba, also known as Dr. Germ, has since written hundreds of papers in peer-reviewed journals on infection and disinfection.

Describing toilet plume, Gerba says, “You get an aerosol production when you flush a toilet, sort of like a toilet sneeze.”

Ever see a time-lapse photo of somebody sneezing? Gerba and his team of researchers did the same thing to look at toilets flushing.

“It looks like the 4th of July with rockets going off from inside the toilet,” he says.

After putting viruses and bacteria in toilets, Gerba and his research team found that after flushing, these microbes settle on surfaces throughout the restroom, particularly within three feet of the toilet. Obviously, toilet tissue dispensers fall into this vicinity. In fact, in another project, Gerba and his team found toilet tissue dispensers had 150 times more bacteria than toilet seats.

In his research, Gerba and his team found the most contaminated areas of the public restroom are the floor, the sanitary napkin disposal lid, the toilet flush handle, the sink and the taps. The toilet tissue dispenser is somewhere in between.

“There’s a lot of variability,” he adds. “It depends how well the toilet paper dispenses and whether users have to touch the dispenser.”

Regardless of how contaminated a toilet tissue dispenser may be, it should be a surface that custodial workers disinfect regularly.

Benjamin Tanner, Ph.D., president of Antimicrobial Test Laboratories, agrees, adding that tissue dispensers are one of the most important objects within the restroom environment to disinfect.

“I think it’s very likely that it’s going to have germs and the kinds of germs that could potentially cause disease,” he says.

From a user standpoint, Gerba says, “you want to touch only the paper you’re going to use and nothing else, if that’s possible. You don’t want to touch any of the hardware that’s part of the toilet tissue dispenser.”

REBECCA KANABLE is a freelance writer based in Milton, Wis.